A fundamental idea behind ChoreBuster is that the amount of work involved in a chore is more important for determining fairness than the number of chores someone does. Mowing the lawn is different than feeding the pet so someone should need to do a few pet-feeding chores to be equal to someone else who spent an hour working in the sun.

Fixated on this, I ignored many requests from people for some way to rotate chores between people – simply assign it to one person, then the next person, then another, until everyone has done the chore, then start with the first person again. It seemed as if what those people really wanted was a physical chore wheel and it would be difficult to incorporate that smoothly into ChoreBuster.

The good news is that a way has been found to incorporate this functionality into ChoreBuster without watering down the original vision or significant changes to the user interface. It turned out to be fairly simple:

Simply set the Intensity of the chore to be “Rotate between people”. Be careful with the Start Date as the first person in the schedule will be the first person to get the new chore on that day. As chores like this have no value associated with them someone doing this chore will not reduce the number of other chores they need to do, but over time everyone will have their turn at doing it so overall fairness will result.

Hopefully you find this useful. It is always a bit difficult to test all the possible ways different types of chores can fit together so there may be unpredictable results. So if you see anything that looks wrong, let us know!

For the last month there have been experiments with how to make ChoreBuster pay for itself.

The first thing that has been tried was a ‘freemium’ model, where basic functionality is given for free but those who need more features can buy a subscription. This has been moderately successful but it has been very difficult to provide a working and useful app while at the same time maintaining the incentive to upgrade; as more and more features are put behind a paywall, the remaining free features become less and less until it is almost unusable.

It feels like a bait-and-switch – offer the promise of something good but then once people have invested time and effort into trying to make it work they find out what they have is crippled and they need to pay.

Starting from yesterday, a new experiment is beginning. This time it is a free trial period of all features, with a subscription needed to continue using the app after a few weeks. It’s simple, clear and honest. In addition there is a new ‘Pro’ subscription for those accounts that are used in a company, where there are more than 10 people involved.

After a couple of months, if that doesn’t work then something else will be tried!

Before September 2019 people could donate any amount to have full access to ChoreBuster, forever. Nothing is changing for those people – they will continue as per the original agreement.

You can now have your chores appear in any calendar app, by using ical integration! Here is an example from Google Calendar: 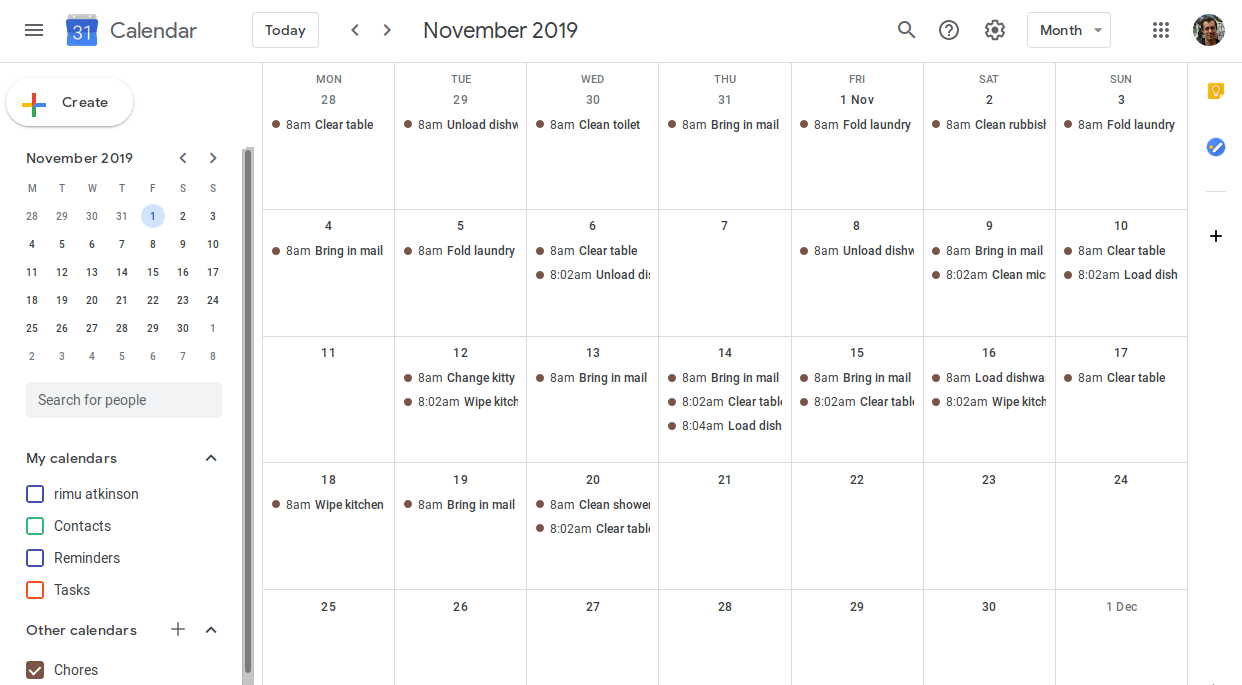 It’s not difficult to set up. Simply to go https://app.chorebuster.net/members/ical_list to find the unique address for a person and then subscribe to it in your calendar program. Detailed instructions for 4 common calendar apps is provided.

In future the chores could be distributed throughout the day based on the ‘Time of day’ setting on the chores and the calendar events could have reminders set so your app will pop up a notification about the chore. If you have any ideas for features to do with calendars, we’d love to hear them!

For a long time, the chores to be done each day were assigned based on the time of day (morning chores before evening ones), so that when the schedule was displayed the chores would be roughly in the order they should be done in.

ChoreBuster shares chores out based on how much work each person has done so far. If Tom does a difficult chore then Harry might need to do two easy chores. However what can happen is if a large chore is in the evening it will be the last to be allocated, after several chores have already been allocated to everyone. Someone ends up with the big chore and ends the day with many more ‘points’ than everyone else. On the next day they have less chores to do while everyone else has more, in order to restore fairness. 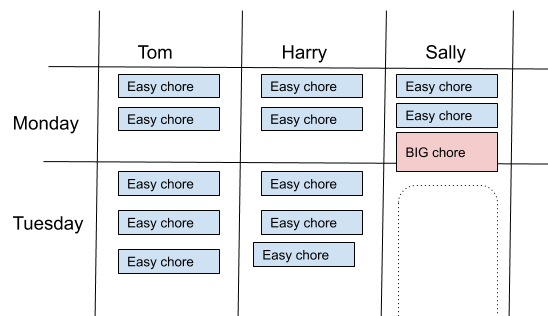 Sally has a big overhang on Monday simply because the big chore was allocated to her last.

But if big chores were allocated before others then there would be less empty days as there would be more opportunity for others to catch up in the same day, more like this: 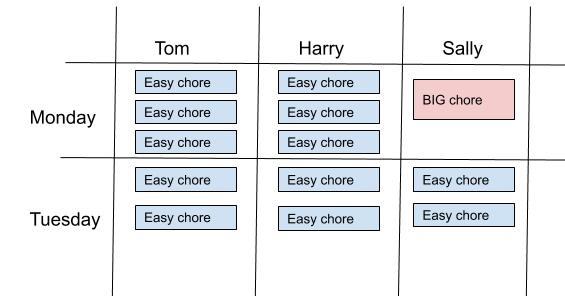 Notice how Tom and Harry have three chores on Monday, instead of two. On Tuesday there is no imbalance to correct Monday’s imbalance.

As this change will fundamentally alter everyone’s schedules, there could be problems or unexpected behaviour. People use ChoreBuster in ways we can’t predict so there may be people who were relying on the old way of doing things, who will be disappointed with the results. If you are one of those people, please tell us and we’ll look into it. If there are many like you it will be possible to provide a setting for you to opt for the old way.

This change will be deployed this weekend, so people notice less discrepancy between their daily and weekly emails.

Buckle up. If things go off the rails, let us know.

The most requested new feature of all time* has been implemented – the option to have chores repel each other – if someone is assigned a chore then certain other chores will not be assigned to them on the same day. For example, if someone is cooking dinner they won’t also be assigned to wash dishes.

The repel effect overrides the default method of sharing out chores that uses the Intensity of chores to keep track of how much work is done. However each person’s running total of work is still tracked so if the repel causes someone to have done less work that day then they will need to do more work in the future to compensate. If you have many chores repeling each other and some people excluded from those chores then it could cause some people to fall significantly behind, leading to them getting all available chores on certain days and other unpredictable behaviour. It will be best to use the repel feature sparingly and for the most part let ChoreBuster use the Intensity to share out chores fairly.

Until the recent rebuild it was relatively difficult to add new features such as this but with the rebuild out of the way there will be a much more frequent series of improvements.

This is quite a big change and there will probably be new bugs as a result. If you notice anything that looks wrong please let us know.

* In the previous version of ChoreBuster there was an area where people could suggest new features and vote for features they wanted. This feature was easily the highest voted.