Some of you who have been using ChoreBuster for a while will have noticed an odd quirk – when you edit a chore it recalculates the entire schedule from when you made your account, often months ago, to the present, then off into the future. As chores are allocated based on what work gets done, the new schedule could look totally different to the one you had moments before.

This isn’t really a problem when you first set up your schedule but as people start to do chores it is – people who had recently finished chores would no longer be allocated those chores and so ChoreBuster would ‘forget’ they had been completed and calculating rewards based on chore completion becomes impossible.

Another side-effect of shuffling a schedule like this is that an email containing chores to do that day may no longer match what is on the website so if some people use the email and others use the website, confusion ensues.

This is achieved by creating revisions of a chore when it is saved, similar to how CMS software does when you edit a page. Each revision has a period of time when it is used to calculate the schedule, which is the time between revisions. The current settings, the ones you see when editing the chore are used from whenever you last saved the chore and into the future.

When saving a chore all future days will be recalculated, as before, so if the weekly email has been sent and you make some changes the day after then the issue of emails and online not matching will still occur. This problem should not occur with the daily email as new settings take effect the day after they were saved.

This was a major rewrite of some core parts of the ChoreBuster algorithm and there were some tricky parts that are hard to be 100% sure about. If you notice any strange behavior, please let us know. If it’s working properly but it is more annoying than helpful, please let us know!

If you change the start date of a chore the revisions don’t work and past parts of the schedule may end up looking different. Sorry, fixing that was too hard for now.

That is the main update we’ve been working on. But there are a few more things we’ve managed to squeeze in recently too, so read on for more.

In order to make chore deletion work the way described above, every chore needs an end date. So when you delete a chore, behind the scenes they are not really deleted, just given an end date. It was trivial to provide a field in the user interface so you can set this to a value without deleting the chore.

This field is not likely to be used often so it is hidden away in the “Optional Extras” section when editing a chore.

Often you’ll want to create a few quite similar chores with minor variations. Now, you can create a duplicate of another chore with a single click from the Show Chores screen. Look for something like this:

Be aware that if you clone a chore with a start date in the past that this will cause the schedule to be recalculated from that date onward, potentially making a mess of your finished chores and rewards tracking. To avoid this you can edit the start date on the cloned chores.

Pretty much every website uses Google Analytics to analyze what people do on the website in order to support marketing efforts and diagnose problems. It’s free and the graphs are pretty. The issue with this is that it means Google then knows everyone’s activity on most of the internet and all the surveillance capitalism that implies.

ChoreBuster now self-hosts its analytics system, meaning no data about your behavior on this site is being provided to Google or other third parties (unless you use Google Chrome but there’s nothing we can do about that!). It was really simple to set up, about as easy to install as WordPress. If you’re running any websites and want a free, simple and high performance analytics solution, give Matomo a try. All you need is a LAMP stack – it’ll work on any shared hosting provider.

Recently we ran a poll of our most involved users, asking for their ideas and feedback about what features they’d like a ChoreBuster mobile app to have.

Most people want to use ChoreBuster on their phone in order to help with the day-to-day running of the household by keeping track of what needs to be done soon and what has been finished. So the first release of a mobile app will concentrate on that and leave making changes to the chores for the future.

This preference makes a lot of sense because having a larger screen, as on a laptop / desktop, makes it much easier to see more of the schedule and see the effect of your changes. Even the best-made mobile app is going to be hard to use for editing a complex schedule involving a few people, simply because of the small screen.

We will begin working on a mobile app in the very near future, as soon the current batch of work is finished. There will be an announcement on what that work is very soon – it’s a big change and fixes one of the longest-running limitations ChoreBuster has so we’re pretty excited about it.

For a long time Chore Buster was fully automatic – you would specify how often chores need to be done and the schedule would be generated for you based on that.

Sometimes it doesn’t come out perfect. For those times, just click on the arrows to move the chore to someone else.

Each chore can now have an icon associated with it, making schedules more attractive and easier to understand, especially for those with low literacy due to young age or disability.

At present the icon library you can choose from is mostly household furniture and places, with a few cleaning actions mixed in. If you find nothing suitable for the chores you’re creating, let us know and we’ll see what can be done to accommodate you.

Also if you find the icons messing up the formatting of the schedule, speak up. There may be situations where text-only is more suitable but without seeing your schedule and situation it’s hard to know. 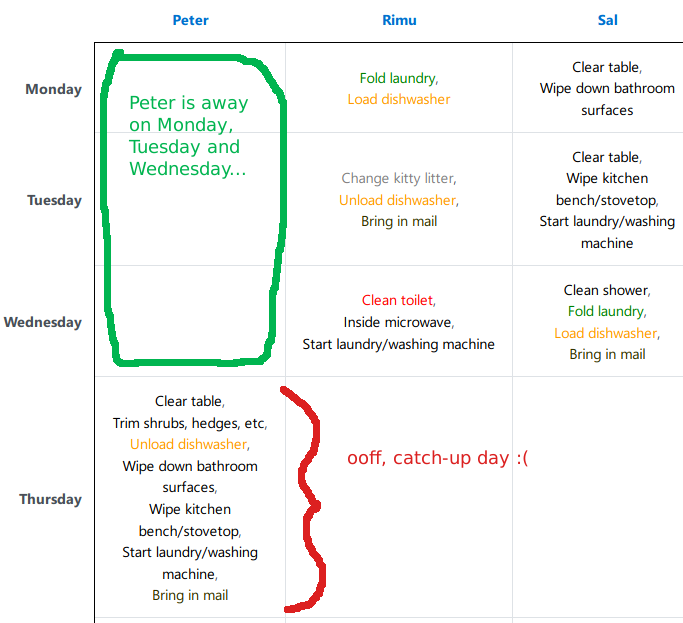 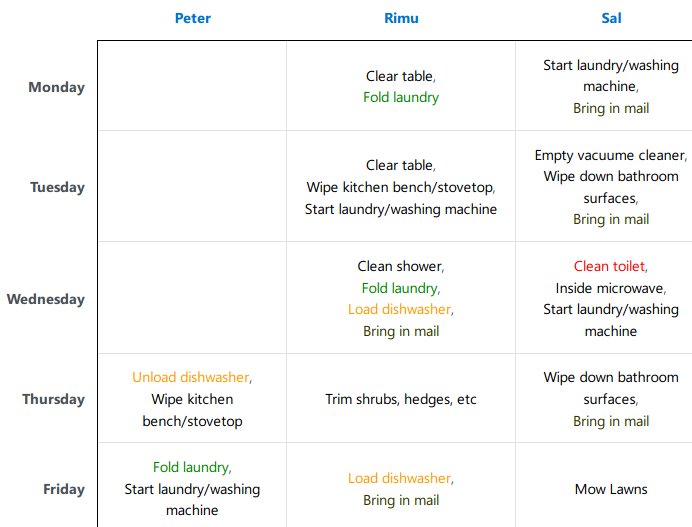 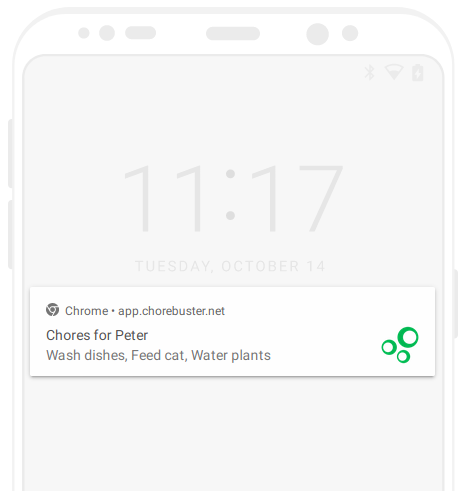 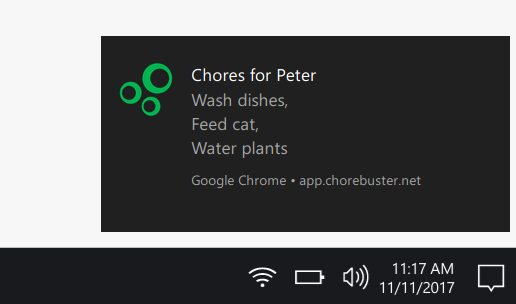 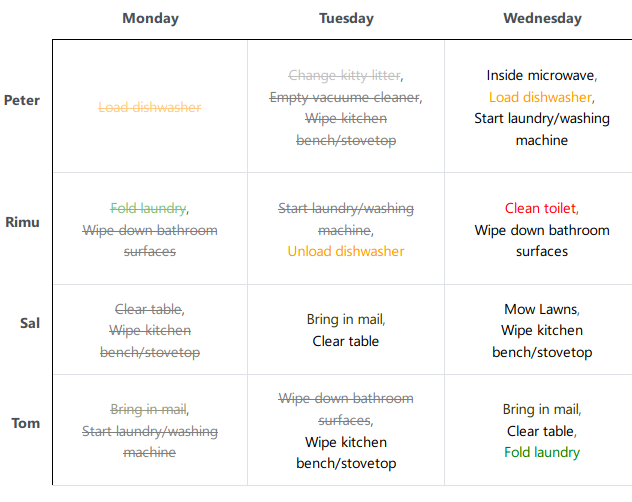